Questions:
Directions: Write the answer to each question.

Question 1 and 2 refer to the passage and diagram below.

Carbon is an element that is essential to life. Atom of carbon can exist as part of different molecules commonly found in living things as well as the non-living parts of the ecosystem. Carbon moves through the environment in a process called the carbon cycle.
Part of the carbon cycle is a short-term cycle in which pants convert carbon dioxide from the atmosphere into sugars and starches. Plants use these substance for energy, releasing carbon dioxide into the air. Other organism eat the plants to get the carbon. Like plants, the organisms break down sugars for energy, releasing some of the carbon back into the air. The decay of dead organisms and wastes also releases carbon into the air. In contrast, the long-term cycle moves carbon through Earth's system over very long periods. Carbon is stored in the geosphere as buried  plant or animal remains. Over mullions of years, these buried remains form fossil fuels, which contain carbon. Carbon is also stored in a type of rock called a carbonate, which forms from shells an bones of once-living organisms. 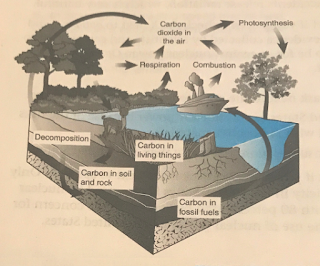