Questions:
Directions: Choose the answer to each question.

Questions 1 through 3 refer to the following paragraph and table.

Solubility is a chemical property referring to the ability of a given substance, the solute, to dissolve in a solvent. Several factors affect the rate at which substances dissolve. Small pieces of a solid dissolve faster than large pieces of the same substance. Smaller pieces have more surface area that is in contact with the solutes dissolve faster in a hot solvent than in a cold solvent. The kinetic theory states that when matter is heated, its particles move faster. Faster-moving solvent particles run into undissolved solute more often. The greater frequency and energy of the collisions help "knock" undissolved solute particles away from each other and spread them throughout the solution. Other factors that affect solubility include pressure, pH, concentration, and state of matter of the solute. For example, gases are more soluble at lower solvent temperatures. The graph shows the solubilities of different solids in water. 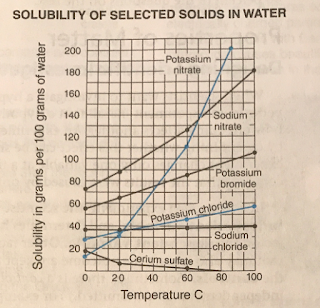