Directions: Write your answer on a separate piece of paper.

Question 1 is based on the passage and image below.

A species is a group of organisms whose members can mate with one another and produce fertile offspring. The development of a new species from an old one is called speciation. Speciation may occur when environments change or when groups
separate, moving to different places. The result of speciation is two or more groups of organism than can no longer reproduce with each other.
Sometimes many species rapidly evolve from one species, a process called adaptive radiation. Adaptive radiation can occur after a small group becomes separated from the rest of the population. Sometimes, if the group finds a new home in an area with plenty of space and many diverse resources, it will diverge into several distinct species. 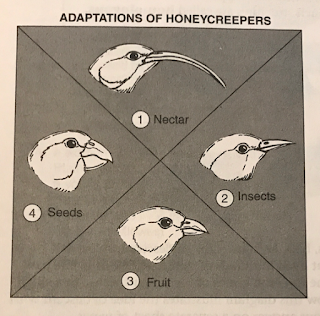 The honeycreeper birds of the Hawaiian Islands are one example of adaptive radiation. The volcanic islands formed millions of years ago in the middle of the Pacific Ocean. Each Island started as a volcano that eventually grew higher than the sea and was colonized by groups became so different that they developed into new species. The diagram shows four beak adaptations found among honeycreepers.
More than 50 known species of Hawaiian honeycreepers arose to fill available niches and habitats on the new islands. Many of these honeycreepers have specialized diets that are adaptations to life on particular islands. Some of the species feed only on the seeds or nectar of unique Hawaiian plants. Today, only 18 of these remarkable species exist.